The Journal of History   Spring 2011   TABLE OF CONTENTS

This is the second of three parts exposing the One World Government, decent people's enemy. It is taken from https://tabublog.com/2014/01/18/revisionist-history-7-owners-of-empire-the-vatican-the-crown-and-the-district-of-columbia/ and corroborated by 3 other websites .
Peace,
Arlene Johnson Editor-in-chief 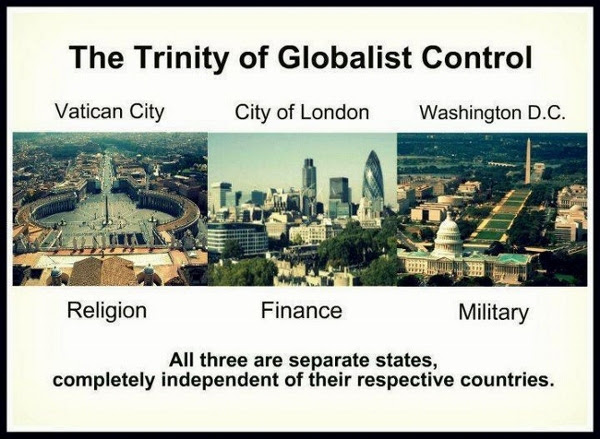 For those of you who having difficulty believing the information presented in this article, I fully understand. For the first 57 years of my life, I would not have believed in the possibility that a shadow government could exist. Three years ago my world view changed. While on vacation in Mount Shasta, I came across a book titled “Global Conspiracy” that seemed strangely out of place in a metaphysical book store. I had never heard of the author before – some guy named David Icke. I scanned through the book and frankly didn’t believe 99% of what I read. But, I saw one thing that caught my attention in that I knew that I could easily verify Icke’s assertion. I did my own research and turned out what Icke had stated was true. That led me down a rabbit hole and many, many hundreds of hours of independent research. ~ Ross Pittman http://consciouslifenews.com/verified-warnings-presidents-about-invisible-government-running-allegiance-people/1136001/****

The Trinity of the Global Empire


The aforementioned city-states listed above are sovereign, corporate entities not connected to the nations they appear to be part of. In other words, the City of London (that is the square mile within Greater London) is not technically part of Greater London or England, just as Vatican City is not part of Rome or Italy. Likewise, Washington DC is not part of the United States that it controls.

These sovereign, corporate entities have their own laws and their own identities. They also have their own flags. Seen below is the flag of Washington DC. Note the three stars, representing the trinity of these three city-states, also known as the Empire of the City. (There is also high esoteric significance to the number 3.)

So how are these three cities ultimately connected? We must first go back to the Knights Templar and their initial 200-year reign of power. The Knights Templar were first called “the Poor Fellow-Soldiers of Christ and the Temple of Solomon.” This is a blatantly misleading title, considering the immense wealth and power of the Templars, who operated 9,000 manors across Europe and owned all the mills and markets.

It was the Templars that issued the first paper money for public use in Europe, establishing the fiat banking system we know today. In England, the Templars established their headquarters at a London temple, which still exists today and is called Temple Bar. This is located in the City of London, between Fleet Street and Victoria Embankment. The aforementioned “Crown,” to be exact, is the Knights Templar church, also known as the Crown Temple. It is the Crown Temple that controls the legal/court system of the US, Canada and many other countries. All bar associations are directly linked to the International Bar Association and the Inns of Court at Crown Temple in the City of London.

Anytime you hear somebody refer to the Bar Association, they are talking about a British/Masonic system that has nothing to do with a country’s sovereignty or the constitutional rights of its people. This is why, when you go to court in the US, you see the US flag with a gold fringe, denoting international rule. The government of the United States, Canada, and Britain are all subsidiaries of the crown, as is the Federal Reserve in the US. The ruling Monarch in England is also subordinate to the Crown. The global financial and legal system is controlled from the City of London by the Crown. The square mile making up the center of Greater London is the global seat of power, at least at the visible level.

Washington DC was established as a city-state in 1871 with the passage of the Act of 1871 , which officially established the United States as a corporation under the rule of Washington, which itself is subservient to the City of London. Corporations are run by presidents, which is why we call the person perceived to hold the highest seat of power in the land “the president.” The fact is the president is nothing more than a figurehead for the central bankers and transnational corporations (both of which themselves are controlled by High Ecclesiastic Freemasonry) that really control this country and ultimately call the shots.

Washington DC operates under a system of Roman Law and outside of the limitations established by the US Constitution. Therefore, it should not be a surprise that the name Capitol Hill derives from Capitoline Hill, which was the seat of government for the Roman Empire. If you look at the wall behind the podium in the House of Representatives, you will notice that on either side of the US flag is the depiction of bundles of sticks tied together with an axe. These are called fasci, hence the root word of fascism. This was the symbol of fascism in the Roman Empire, as it was under the Nazis and still is today. It is not a coincidence that these symbols are featured on the floor of Congress.

So, who owns the giant U.S. corporation? Like Canada and Australia, whose leaders are prime ministers of the queen, and whose land is called crowned land, the U.S. is just another crowned colony. Crowned colonies are controlled by the empire of the three city states. Thus, the U.S. is controlled by the three city states “There exists a shadowy government with its own Air Force, its own Navy, its own fundraising mechanism, and the ability to pursue its own ideas of national interest, free from all checks and balances, and free from the law itself.” – Daniel K. Inouye, US Senator from Hawaii, testimony at the Iran Contra Hearings, 1986  These 3 City-States belong to no Nation and pay no taxes. They have their own separate laws, own police, mayors, post offices. Their own separate flags and their own separate identities.
****
The Religious Control: The Vatican. pop. 1,000 people. Own newspaper, postal service, library, pop. 1,000. Own army of Swiss Guards and own prison. Rules over 2 billion people. Wealth is held by Bank of England (Rothschild) and Federal Reserve Bank (private corporation.)
***

The Banking Control: The City of London aka The Crown 11,000 people.http://intheknow7.wordpress.com/2010/01/25/empire-states-geostrategic-powercenters-part-2-of-3/

1694 by William of Orange known as ‘The Crown’. The ‘Crown’ is not owned by the Westminster and the Queen or England. “The City of London has been granted various special privileges since the Norman Conquest, such as the right to run its own affairs,[20][21] partly due to the power of its financial capital. These are also mentioned by the Statute of William and Mary in 1690.[22] City State of London is the world’s financial power centre and wealthiest square mile on earth — contains Rothschild controlled Bank of England, Lloyd’s of London, London Stock Exchange, ALL British banks, branch offices of 385 foreign banks and 70 US banks. It has its own courts, laws, flag and police force — not part of greater London, or England, or the British Commonwealth and PAYS ZERO TAXES! City State of London houses Fleet Street’s newspaper and publishing monopolies (BBC/Reuters), also HQ for World Wide English Freemasonry and for worldwide money cartel known as The Crown… For centuries the Bank of England has been center of the worlds fraudulent money system, with its “debt based” (fiat currency) – the Rothschild banking cartel has maintained tight-fisted control of the global money system through The Bank for Intl. Settlements (BIS) International Monetary Fund (IMF) and World Bank, the central banks of each nation (Federal Reserve in their American colony), and satellite banks in the Caribbean — they determine with the stroke of pen the value of ALL currency on earth; it is their control of the money supply which allows them to control world affairs (click here for Federal Reserve owners) — from financing both sides of every conflict, through interlocking directorates in weapon manufacturing companyes, executing global depopulation schemes/crusades/genocide, control of food supply, medicine and ALL basic human necessities – they have groomed their inaudibility through control of the so-called “free press” and wall themselves off with accusations of anti-Semitism whenever the spotlight is shone upon them — their Zionist tentacles reach into every major financial transaction on earth…unchecked power!

The Crown is NOT the Royal Family or British Monarch — The Crown is the private corporate City State of London — its Council of 12 members (Board of Directors) rule corporation under a mayor, called the LORD MAYOR… legal representation provided by S.J. Berwin

ENTER THE ROTHSCHILDS MAYER AMSCHEL BAUER OPENED a money lending business on Judenstrasse (Jew Street) in Frankfurt Germany in 1750 and changed his name to Rothschild. Mayer Rothschild had five sons. The smartest of his sons, Nathan, was sent to London to establish a bank in 1806. Much of the initial funding for the new bank was tapped from the British East India Company of which Mayer Rothschild had significant control. Mayer Rothschild placed his other four sons in Frankfort, Paris, Naples, and Vienna.

This gave the Rothschild family complete control of the British economy – now the financial centre of the world, and forced England to set up a revamped Bank of England with Nathan Rothschild in control.Ruling ‘Committee of 300’ for The ‘Crown’ names included in the London based corporation are names like: Rockefellers, Gore, Greenspan, Kissinger, Krugman (NYTimes), Powell, Gates, Buffet, Bush, etc. Why are these ‘Americans’ on a foreign committee…because the Crown STILL owns the UNITED STATES CORPORATION, private corporation!